The withering of the welfare state 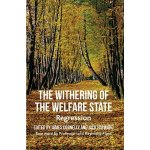 Another publication has come to fruition.  Palgrave Macmillan have just published The Withering of the Welfare State, edited by my colleagues, Professors James Connelly and Jack Hayward.  I have a chapter in it entitled, ‘Constitutional Change and the Tensions of Liberal Democracy’.

The book is published to mark the 50th anniversary of the founding of the Politics Department at Hull.  It is being launched at the university on 23 February, when the Speaker of the House of Commons, John Bercow, will be delivering a lecture – as part of the anniversary celebrations – on parliamentary reform.

Professor of Government at Hull University, and Member of the House of Lords
View all posts by Lord Norton →
This entry was posted in Uncategorized and tagged Jack Hayward, James Connelly, liberal democracy, The Withering of the Welfare State. Bookmark the permalink.

7 Responses to The withering of the welfare state