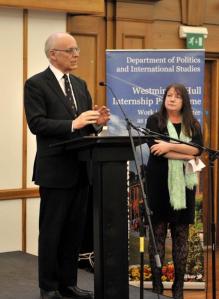 The most popular posts, according to my WordPress statistics, are the caption competitions, though the most extensively read in recent times has been the preceding post on same-sex marriage.  Here’s the latest caption competition.  It is a picture taken at the recent reception in Hull to mark the 25th anniversary of the Hull parliamentary placement scheme.   As usual, the winner will be the reader who provides what in my opinion is the wittiest caption.  The prize will be a copy of either Eminent Parliamentarians or The Voice of the Backbenchers.  That is, unless the winner is Tony Sands, who has now triumphed twice in the competition and so won copies of both.  Given that, I had better add Parliament in British Politics, 2nd ed., to the list.