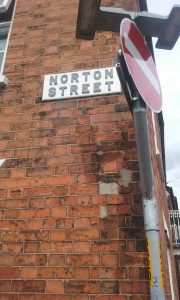 I thought I would introduce a quick quiz.  There isn’t a formal prize, other than the kudos of being the first to provide the correct answer.  I recently met up with a friend to visit a town with which I am reasonably familiar.  My friend was keen to visit the birthplace of a noted public figure of the 20th Century.   I have certain characteristics in common with that person.  The town also boasts a Norton Street.  About twenty towns or cities have a Norton Street, but from the clues I have given you should be able to have a good guess as to which town it is.

I know the picture shows the name next to a No Entry sign.  The sign at the other end of the street is by a recycling shop.   Make of that what you will.

Professor of Government at Hull University, and Member of the House of Lords
View all posts by Lord Norton →
This entry was posted in Uncategorized. Bookmark the permalink.

11 Responses to Guess the town