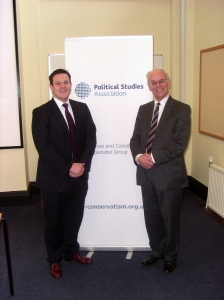 A drum roll…   I can now announce the winner of the latest caption competition.  There were some very good entries.  Indeed, I don’t think that on this occasion there was a duff submission.  Put another way, you were all possible winners, but I had to narrow it down.  There were some close contenders.  Tony Sands was spot on in noticing Dr Beech’s inappropriate footwear in town, and maude elwes similarly observant in terms of Dr Beech’s non-conservative dress sense.  However, at the end of the day, I decided there were two runners up as well as the eventual winner.

The runners-up were Nicholas James with a very clever: ‘Instead of writing their own vows, in a slightly unusual move, the grooms have decided to come up with a new name for their marriage instead’; and Matthew Oliver with ‘Is the man dressed up as a sign saying to Dr Beech “please stop standing on my foot”?’

However, the one that made me laugh even more was Pendragon with: ‘They were impressive, but Lord Norton realised he’d just have to get smaller business cards’.

If Pendragon would like to get in touch, recent publications will be on their way.

1 Response to The winner…