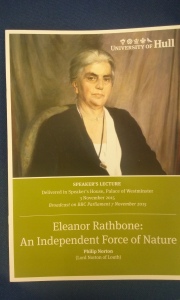 In an earlier post, I reported details of the Speaker’s Lecture I gave last November on Eleanor Rathbone, the remarkable Independent MP who sat in the Commons from 1929 until her death in January 1946. During her service in the House, she demonstrated what a determined and well informed Member, free of party constraints, could achieve.

The lecture has now been published by the University of Hull, following publication of the other two public lectures I gave last year: the Founder’s Day Lecture on another MP of the early 20th Century, Thomas Ferens, and the High Sheriff’s Lecture on Magna Carta.  As regular readers will know, both are freely available.  Copies of the Rathbone Lecture are available for anyone on campus – they can be collected from the trays outside my office – and anyone in Westminster: if the latter, just let me know you would like a copy or copies.

Professor of Government at Hull University, and Member of the House of Lords
View all posts by Lord Norton →
This entry was posted in Uncategorized and tagged Eleanor Rathbone, Speaker's Lectures, University of Hull. Bookmark the permalink.