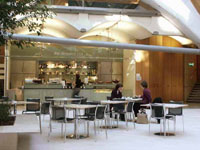 As I reported in an earlier post, I spoke at the panel on ‘Designing for Democracy’ at the PSA Conference in Glasgow, looking at the design of Parliament.

How parliamentarians behave is shaped by their physical surroundings.  As Winston Churchill said (and as virtually every panel member repeated), we shape our buildings and then our buildings shape us.   After the House of Commons was destroyed by enemy bombing on 10 May 1941, the Commons moved into the chamber of the Lords and the Lords sat in the Robing Room, but the new space was laid out in the form of the original chamber.  The chamber of the Commons was rebuilt so that it was basically the same as before.  The intention, if and when both Houses move out under the proposed restoration and renewal (R&R) programme, is to recreate the chambers.

The focus in this, though, is on formal space.   By this, I mean the chamber and committee rooms, governed usually by formal rules and constituting a recognised and minuted part of parliamentary proceedings.  In my presentation, I focused on social space.  By this, I mean space not governed by formal rules and minutes and where contact between members and between members and others (such as members of the other House, staff, public) is informal – but contact that can affect parliamentary behaviour. The methodological problem is that it is not measurable, but it is important for socialisation into the institution, for information exchange, and for lobbying.

There has always been space which has been exclusive to Members – in the Commons, for example, there is the Members’ tea room, smoking room, and the Members’ Dining Room.  In the Lords, there is the Bishop’s Bar and the Long Table in the Dining Room.  The nature of the space has differed between the two Houses. MPs, for example, dine on a party basis.  Peers don’t, but rather employ the Long Table principle, facilitating cross-party contact.

These spaces have been important for political discourse and have featured in memoirs as the sites employed by political leaders to curry favour.  Margaret Thatcher, for example, would occasionally descend on unsuspecting Members in the tea room in order to find out their concerns.  It could be argued that Edward Heath’s neglect of the tea room contributed to his loss of the party leadership.

In my view the most significant change since the Palace was constructed in the 1850s took place in 2001 with the opening of Portcullis House. This was important for three reasons:

Second, and offsetting this, it has created a major social space in the form of the Atrium (pictured), with attendant meeting and eating facilities. Furthermore, this space exists at the intersection of various parliamentary buildings – it links 1 Parliament Street, Norman Shaw North and South, with the rest of the Palace.  MPs from these buildings pass through the Atrium on the way to the chamber.

It is, in short, a major social space – crowded on most days of the parliamentary week – and one for which there was no previous parallel in the Palace of Westminster. There are meeting rooms and dining rooms, but nothing comparable to the Atrium in Portcullis House.  It is a unique social space, facilitating interaction between members of both Houses and between members and others – staff, journalists, representatives of outside organisations, and members of the public.

In my view, it has transformed the dynamics of Parliament. It has shifted the emphasis from the Palace to Portcullis House.  It is the place to be to find out what is going on and for social and unscheduled meetings with fellow parliamentarians.

When we have R&R, it will be interesting to see how it affects the impact of the Atrium. Portcullis House itself will remain open – it is not formally affected – but it will no longer be at the intersection of parliamentary life.  It will move to the edge of the temporary parliamentary estate.  Though MPs will be able to reach it without leaving the estate, that will not be the case for peers.  We will have a somewhat detached existence.

My basic point in my presentation was to draw attention to the importance of social space within Parliament and the extent to which it can affect the dynamics of an institution.  The focus of our relocation will be, as after 1941, recreating as far as possible the formal spaces in the form in which we know them.  The challenge will be in ensuring social spaces are not neglected or seen as a inconsequential to the workings of a legislature.  Social space makes a difference.

Professor of Government at Hull University, and Member of the House of Lords
View all posts by Lord Norton →
This entry was posted in Uncategorized and tagged Portcullis House, PSA Conference 2017, the Atrium. Bookmark the permalink.

4 Responses to Social space in Parliament